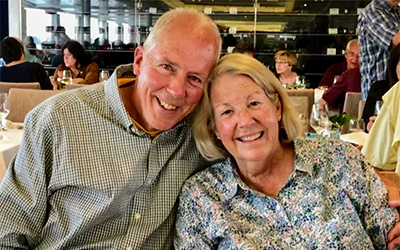 Skagit Valley College recently celebrated the opening of the Sue Krienen Early Learning and Childcare Center at its Mount Vernon campus. The center was the vision of SVC Foundation donor and resident Sue Krienen back in 2017 and came to fruition through a partnership with the college. The center will officially open for childcare in September.

“We see early childhood education and childcare as an obvious investment in our community and important part of the mission of our college,” said Dr. Tom Keegan, SVC president. “One might not think that a community college includes early childhood learning and childcare in its mission and vision, but we certainly do here at Skagit Valley College.”

George and Sheila Saul of Oak Harbor have also shown their support for early childhood education by endowing a substantial scholarship fund to support students in need who are pursuing a four-year Early Childhood Education degree.

The Peg Moy and Sheila Moy Saul Early Childhood Education scholarship fund is named after Sheila’s mother, Peg Moy, who lived in Ithaca, N.Y. with her GI Bill-educated husband where they raised six children, including their eldest daughter, Sheila.

Sheila graduated from Cornell University 50 years ago with a BS in Education and Child Development. While her husband, George, was stationed at Ft. Lewis, Sheila obtained a Master of Education in Special Education from the University of Washington. She has taught in preschools, elementary schools, junior high, and high schools –– from Rieman Hall Juvenile Facility to the fabled Heidelberg American High School. In retirement, she volunteers at Coupeville Elementary School.

George is a volunteer caseworker at Navy-Marine Corps Relief Society and was a mentor with the Island County’s Drug Court program. With the Whidbey Community Foundation, George helped to kick off the foundation’s annual grant program. In addition to providing financial support to many community causes, George and Sheila have sponsored a Sno-Isle Library Prime Time family reading program for third graders in honor of George’s mom who was a librarian. They have also provided scholarships to graduating Oak Harbor High School students in honor of George’s dad.

For more information or to donate to the SVC Foundation, contact Brad Tuininga at [email protected].