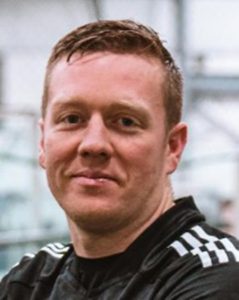 “I am very excited and honored to be the men’s head soccer coach at Skagit Valley College. The program has a rich soccer history that I plan to continue,” Henderson said. “The college mission, vision, and values are in alignment with my own, and I believe this is an ideal place to develop a winning program that excites the community and generates interest from all over the world.

“I expect my teams to be brave in and out of possession. The courage to enjoy having the ball is key. Coming to watch our games, you should expect to see an attacking, fast, creative team, but always with a tactical discipline. The template for everything is the robust organization that we work on daily.”

Henderson played professionally in Scotland with Raith Rovers and Arbroath Football Club. He was then a 4-year starter and 3-year captain of McKendree University, formerly NAIA. There, he led the Bearcats to two AMC regular season titles and the school’s best record of 17-1 in 2011.

He was an honorable all mention his freshmen year, and then, first team all-conference every year McKendree was eligible until their transition to NCAA. He holds licenses and certifications from the Scottish Football Association, U.S. Soccer Federation, and U.S. Futsal.

Henderson led Sehome High School to the state title in 2019 – their first in over a decade. He has also won both outdoor and indoor titles in Washington state semiprofessional leagues, Washington Inland Soccer League (WISL), and Evergreen Premiere League (EPLWA).

“We are thrilled to have Richard join our SVC family and to lead our soccer program,” said Director of Athletics Mitch Freeman. “He brings a wealth of knowledge and experience that will continue to elevate our men’s soccer program and college. We look forward to working with him as we add to the championship legacy of SVC soccer.”

Henderson resides in Bellingham, Wash. with his wife, Maria, and two daughters, Nevada and Kellina.