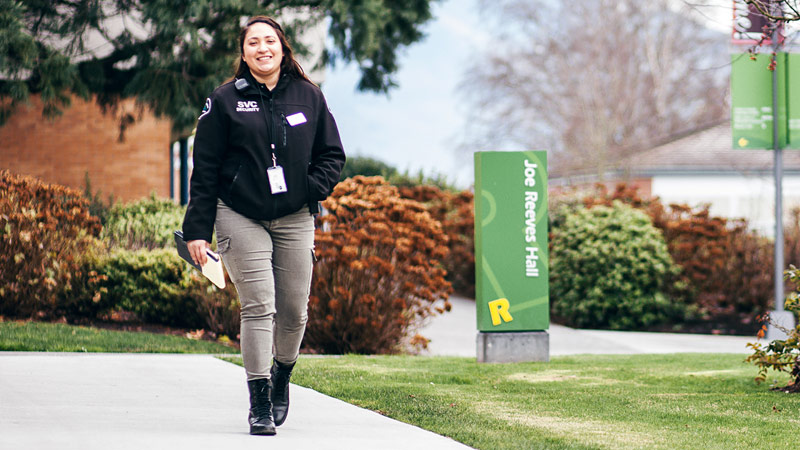 A Safe Place to Work and Learn

At Skagit Valley College, the safety of our students, employees, and visitors is our primary concern. The following information will inform you what SVC Security services are available to you.

Skagit Valley College uses RAVE as our Emergency Notification System. RAVE is used to communicate with students and employees in the event of a college emergency, weather-related delay, or closure of a campus. The RAVE Alert system can send email and text message notifications directly to your mobile phone. You can learn more about the RAVE Alert system and how to sign up for additional notifications by visiting www.skagit.edu/getrave.

On the Whidbey Island Campus, San Juan Center, South Whidbey Center, and Marine Technology Center, Campus Security personnel can be reached at 360.679.5383. The Security Office is located in Old Main (Building B) room 114. Not all of the Security services listed above are available outside of the MV Campus.

SVC Security manages the Lost & Found program for the college. If you find something of value that you believe was lost by another person, please deliver it to the nearest Campus Security Office so we can attempt to return it to the rightful owner. If you lose an item, please contact us to see if someone else turned in your missing item.

As the old saying goes, “If you see something, say something.” Skagit Valley College uses the Incident Report Forms to receive, track, and record violations of college and campus rules, policies, and procedures. These forms can be accessed by clicking the appropriate button below:

All students are expected to conduct themselves according to the standards described in SVC’s Code of Student Conduct, which can be found at www.skagit.edu/conduct. These standards, which are part of Washington Administrative Code (WAC), are consistent with our guiding principles of Respect, Integrity, Open & Honest Communication, and Collaboration. Students are expected to comply with SVC’s Code of Student Conduct both on and off campus when participating in college activities. Any person who observes student conduct counter to these standards is encouraged to report such behavior to a Student Conduct Officer using the Incident Report Form.

Skagit Valley College maintains a Bias Incident Response Team (BIRT) to respond and implement protocol whenever a hate crime or bias incident is perceived to have occurred. This protocol is specific to addressing hate crimes or bias incidents directed at or affecting members of the SVC Community. SVC defines a Bias Incident as an act- either verbal, written, physical, or psychological, which is personally directed against, or targets an individual or group based on perceived or actual characteristics such as race, color, nationality, ethnicity, religion, gender identity or expression, disability or sexual orientation. The act itself may not be illegal, but it is hateful toward a particular identity group.

SVC strongly encourages the reporting of all hate crimes and bias incidents that occur on campus or at college sponsored events and activities occurring off campus. Please use the following online form:

If you wish to report in person, you may do so to the following areas:

Campus View Village (CVV) is the on-campus student housing complex located north of the SVC Mount Vernon campus. The college employs a full-time staff to help maintain a safe and inclusive atmosphere for all residents and guests. In addition to the SVC Code of Student Conduct, CVV upholds specific housing-related policies. If you are aware of any violation that threatens the safety and security of CVV residents, you are encouraged to submit a Campus View Village Incident Report immediately by clicking the button below.

The SVC CARE Team works directly with students to find solutions to academic, social, and personal issues that may impact a student’s potential for success. Congruently, SVC seeks to foster a climate of safety that requires the involvement of all college community members. Faculty, staff, students, and other community members are encouraged to report observed behavior that warrants concerns for the safety and well-being of the community, or the safety of an individual.