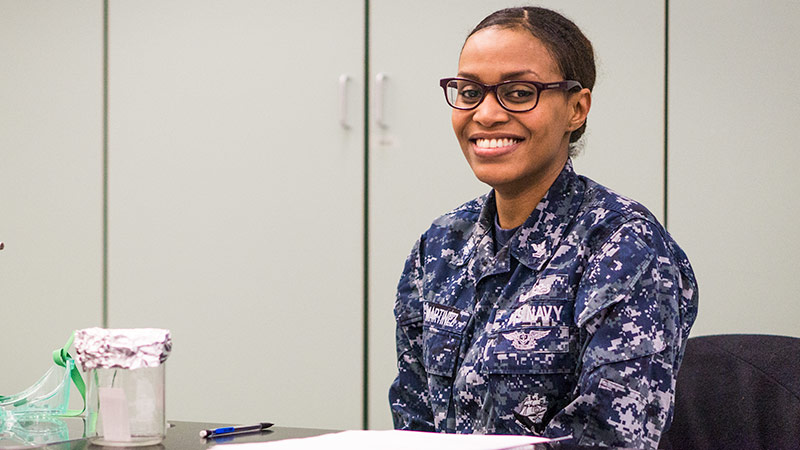 Financial Aid and Other Funding Options

Visit Financial Aid
All students are highly encouraged to fill out the FAFSA each year, in addition to their military education benefits.

Thank you for your service! We will provide basic information needed to access and use your VA Educational Benefits. The SVC Veterans Education Office stands ready to provide outstanding customer service to you as you embark along the path toward achieving your educational goals at Skagit Valley College!

Our offices are located in the Counseling and Advising Center on the Mount Vernon Campus and in Oak Hall on the Whidbey Island Campus and we are open weekdays to assist you.

Skagit Valley College has voluntarily agreed to adopt the procedures set out in Executive Order 13607, Establishing Principles of Excellence for Educational Institutions Serving Service members, Veterans, Spouses, and Other Family Members and will provide a Financial Aid Shopping Sheet that describes the educational costs and financial aid available to help those students meet those costs.

You can find the information contained in the Shopping Sheet by using the GI Bill® Comparison Tool located at the VA website located here: Shopping Sheet

GI Bill® is a registered trademark of the U.S. Department of Veterans Affairs (VA). More information about education benefits offered by VA is available at the official U.S. government Web site at https://www.benefits.va.gov/gibill.

Residency for Military and Veteran Students

If you are active duty military, stationed in Washington, you and your dependents qualify as residents for tuition purposes. You must provide documentation such as transfer orders or other appropriate documents at the time you apply for admission.

If you are a veteran, you may also qualify as a resident for tuition purposes if you meet the requirements as a “covered individual” as defined in the Veterans Access, Choice and Accountability Act of 2014 (Choice Act) that went into effect on July 1, 2015. The Choice Act requires states to charge in-state tuition and fees to “covered individuals.”

A “covered individual” is defined in the Choice Act as:

A covered individual remains covered as long as the student maintains continuous enrollment. (Does not include breaks between quarters or summer quarter.)

Credit for Prior Learning & Military Training

Veteran students are required to provide official transcripts from any previous colleges attended as well as having an official copy of their Joint Services Transcript (JST) sent to SVC so we can evaluate their experience and training to determine what, if any, credits can be awarded.  You can contact your previous college to obtain a transcript and you can download a copy of your JST at https://jst.doded.mil/. Students may also check with the Veterans Education Coordinator for more information about credits for military service or about obtaining advance standing for prior learning or experience.

Veterans must declare a program of study or degree objective – this is your Education Plan. The VA will only pay for classes that are required toward your degree or VA-approved program of study. If you are not sure, ask at the Veterans Education Office.

Veterans must complete the course work paid for. A Grade of ‘W’ (or other non-punitive grade) will result in overpayment, which means some or all the benefits received from VA may have to be repaid.

Veterans must notify SVC Veteran’s Office when: changing classes (adding or dropping), withdrawing from SVC, or when you stop attending classes or when you receive any communication from the VA that is unclear to you. Additionally, educational benefits may be terminated for unsatisfactory academic progress or student conduct. Good communication is KEY! Let us know if anything changes with regard to your classes, education plan or benefit status.

NOTE: Certifying Your Benefits is Not Automatic! You must contact the SVC Veterans Education Office after you have registered for classes to let them know you plan to use your VA benefit before they can certify you. When we “certify” your classes, we are telling the VA:

This is when we tell the VA how much they are to pay the school for your tuition and fees. It also starts your textbook payment and Housing Allowance. NOTE: If you don’t come in and allow us to certify your classes before the date when payment is due to SVC, you may be automatically dropped from classes you have previously registered for. If in doubt, call or visit us.

For Students Using All Other GI Bill® Chapters

ESSB 5355 modified the definition of resident student to comply with federal requirements established by the Veterans Access, Choice, and Accountability Act of 2014 (Choice Act). The Choice Act requires states to charge in-state tuition and fees to “covered individuals” training under the Post-9/11 GI Bill® and the Montgomery GI Bill®. A “covered individual” is defined in the Choice Act as:

Individuals who initially meet the requirements above will maintain “covered individual” status as long as they remain continuously enrolled at SVC even if they are outside the 3-year window or enroll in multiple programs. Continuity of enrollment is not broken by holiday vacations; vacation periods; periods during the school year between quarters or by non-enrollment in the summer quarter. It is not necessary for the student to take steps to establish Washington as their permanent domicile although they may want to do so if they plan to stay in Washington, especially if they plan to attend college after they exhaust their benefits.

A veteran who was honorably discharged from the United States Armed Forces may be eligible for a 20% tuition waiver if the student meets all of the following requirements.

Skagit Valley College will waive all tuition and certain fees for the children, adopted children or stepchildren, and spouses of eligible veterans or National Guard members, who died while on active duty, are permanently and totally disabled because of service-connected injury or illness, are missing in action, are prisoners of war or who are rated by the Veteran’s Administration as 100% disabled. “To be eligible a child must be a Washington domiciliary between 17 and 26 and the child of a Washington State domiciliary. A surviving spouse, to be eligible must be a Washington domiciliary, and it must have been ten years or less since the loss. In addition, the spouse must not have remarried. Each recipient’s continued eligibility is subject to the school’s satisfactory progress policy.” Total credits earned using this waiver may not exceed two hundred quarter credits, or the equivalent of semester credits. The 200 quarter credit limit applies to all combined credits earned via this waiver at the state of Washington colleges & universities. Note: An “eligible veteran or national guard member” means a Washington domiciliary who was an active or reserve member of the U.S. military in a war or conflict fought on foreign soil or in international waters, and if discharged from service, has received an honorable discharge. SKAGIT VALLEY COLLEGE Return to Military 60% Students receiving military tuition assistance (TA) at Skagit Valley College (SVC) are subject to a repayment of all or a portion of their tuition if they fail to attend throughout the duration of the quarter. Official Withdrawals Students receiving TA that withdraw from classes during the quarter will be required to provide Enrollment Services with completed withdrawal paperwork (F5 card and registration form). This paperwork will document the students last day of attendance in classes (LDA). This date will be used to establish the date the student began the official withdrawal process and used to calculate the students required repayment, if necessary. Repayment calculations are conducted when a student officially withdraws from all registered classes prior to 60% of the quarter. If a student withdraws from classes beyond the 60% point in the quarter they are considered to have earned 100% of their TA and no repayment calculation is required. Unofficial Withdrawals Skagit Valley College requires instructors who assign non-passing grades to provide the student’s last date of attendance at the point grades are submitted. At the end of the quarter, once instructors have reported all grades, the Enrollment Services Office will run a report to identify students who received TA and who did not receive any credits (no passing grades). This list is reviewed to determine whether students are considered to have unofficially withdrawn for the quarter. Each student is reviewed to determine their latest LDA. If a student failed to attend at least 60% of the quarter a repayment calculation is conducted using the instructors reported LDA. Refund of Tuition The amount of earned TA is calculated on a weekly basis from the first day of classes. The process uses calendar rather than business days of each week. Earned TA is determined by taking the number of weeks attended before enrollment ended divided by the total number of weeks in the term. (First day of instruction until the last day of finals). Fall quarter equals a 12 week quarter, Winter and Spring are 11 week quarters and Summer quarter is 8 weeks. See examples: Example 1: 12 Week Course Withdraw submitted

Return policies apply to students that withdraw on or before the 60% point of the term. For students who withdraw after the 60% point-in-time, there is no unearned TA. Calculating Return of Military TA Once the earned and unearned TA percentages are determined, the next step is to calculate the dollar amount of unearned TA that must be returned. The Return amount is determined by multiplying the unearned TA percentage by the total of TA tuition. Unearned TA Percentage: X Total of TA tuition = Total Unearned TA School Return Amount The amount of unearned TA that must be returned by SVC is a percentage of the tuition for the term. Once the dollar amount of the earned TA is determined, it is compared to the total amount of the students TA tuition. Unearned tuition is determined by subtracting the earned tuition from total TA tuition. Once the unearned TA is figured SVC will recalculate the students TA and the invoiced amount to the military will be reduced only to reflect the earned amount of TA. TA Refund versus School Return Amount In most cases, the amount of the student refund will be less than the amount of the school return of unearned TA funds. When the student discontinues enrollment, a balance will be created on their account at SVC for the difference between the refund and the return amount. The student will be responsible for paying this balance. The student will receive a notice of tuition due for the balance of tuition created by the return of unearned tuition to military TA. SVC will send at least three billing notices to the student, notifying them of their repayment obligations. The student is given a deadline by which they are expected to repay their tuition. Students who fail to resolve their debt or make arrangements for repayment in a timely manner are then referred to a Collection agency.